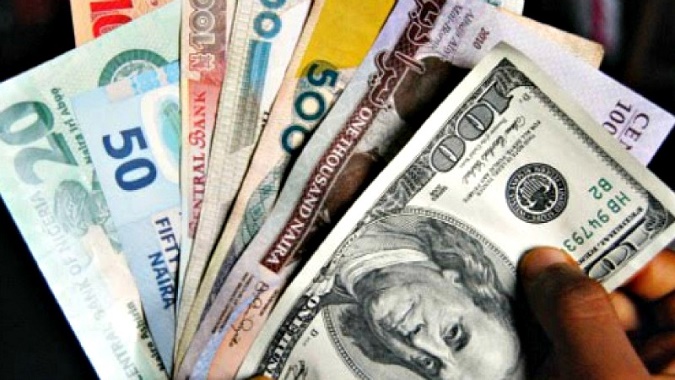 This post is being updated every day to make sure that it is accurate. We update immediately there is a change in the exchange rate between the Naira and the Dollar.

We also included a table that shows the Dollar to Naira exchange rate history from 1981 to date.

The exchange rate history on the table below shows the opening and closing exchange rate of the Naira against the United States Dollar (USD) from 1981 to date.

The figures below are the exchange rate of $1 to Naira.

The Nigeria Official Exchange Rate (bank rate) of the United States Dollar is currently fixed (pegged) by the Central Bank of Nigeria (CBN). This is the rate all banks in Nigeria are expected to exchange the USD for the Naira. Although there might be slight changes depending on the bank you are trading with.

The black market exchange rate of dollar is the price at which vendors operating outside legal banking channels exchange the dollar for Naira – always intending to maximize huge profit. For this reason, the black market rate will always be higher than the official exchange rate.

Brief History Of The Dollar

Some people are of the opinion that the dollar’s days are numbered. Let us take a good look at the history of the dollar to see how it got to where we are today.
The origin of the “dollar” was from the city of Joachimsthal in Bavaria which is now Germany. In 1518, silver from the mines near Joachimsthal was minted into silver “thalers,” at 29.2 g standard weight.

After this, the governments in Europe adopted this standardized coin. The silver coins were produced by many governments, it came from many locations, but they were all identical. The whole of Europe was on the dollar standard.

Later, the Spanish silver dollar came from the rich mines of the Spanish colonies all round the New World, mainly Mexico. Then the Spanish dollar later became the common coin in the American colonies. Nevertheless, the silver dollars throughout Europe also circulated.

After the American Revolution in 1792, Congress adopted the dollar as the standard in the new United States. They followed a standard practice everywhere in Europe. The United States Dollar (USD) was lighter than the original thaler, at only 27.0 g of silver.

Back then, gold and silver traded at a ratio that hardly varied over a long period. It was a “bimetallic” system. Only about 15 ounces of silver had same value to an ounce of gold.

Gold later became the major monetary basis instead of silver. Britain went to a “monometallic” system in the year 1816. The United States put gold on top in the year 1834, but British-style monometallism was not totally adopted not until 1900.

The dollar as roughly 1.5048 g of gold, has a history that dates back to the 16th century and encompassed in the whole of Europe. The “dollar” was an unchanging unit 1933.

There were many experiments with paper currencies. The U.S. colonies had hyperinflation in the 1740s, then about 40 years in the 1780s. There was another currency devaluation during the Civil War. After the smoke cleared, gold dollar was stabled.

The 1st permanent devaluation of the U.S. dollar happened during the Great Depression. The dollar’s value reduced to $35/oz in 1933 (0.8887 grams).

It was something of an accident in 1971 when the floating currencies was introduced. It was an unplanned consequence of an easy monetary policy of 1970, which was supposed to be temporary.

However, it was the greatest changes to Western civilization for the past 500 years. It made the dollar lost about 90% of its value, it stabilized around $350/oz. between the 1980s and 1990s.

The period of crude stability is known as the “Great Moderation” by most economists. The period apparently ended. We are now in a period of currency deterioration, whose final outcome is yet to been seen or determined.